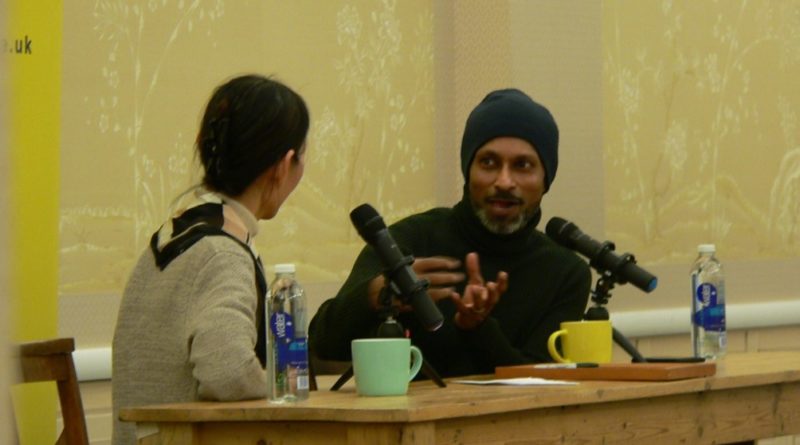 Growing up in a household filled with the music of Tom Jones, Michael Jackson and classic Bollywood tunes led Akram Khan to explore how the body can be moved to express the various states of emotions. In a night of casual conversation with our guest host Wenlan Peng, he shared anecdotes of growing up dancing to classical Kathak whilst being influenced by the movements of Michael Jackson and how his Bangladeshi heritage shaped his thoughts and ideas around using dance to express himself.

He also revealed his original creative process with audiences, which is often sparked by the simplest embryonic idea before developing into big productions. He also gave us behind- the-scenes insights into the making of Desh and his collaborations with other world-class creatives such as Anish Kapoor and Juliette Binoche.

Against the wide range of topics and ideas touched on that night, his art could be summarised in this inspirational statement: ‘The more you limit me, the more creative I’m gonna be.’

To mark National Hate Crime Awareness Week, China Exchange is publishing “No Place for Hate: Post-Pandemic Actions for London’s Chinatown” its report into Chinatown’s recovery with a particular emphasis on COVID-19 racism. The report marks a significant moment in a 12-month project focused on understanding and supporting London’s Chinatown in its response to an increase in hate towards people of East and Southeast Asian (ESEA) heritage.  … Read More

China Exchange is recruiting for a Venue Hire Coordinator to join the team on a 25hrs per week 6 month contract. This role supports the financial stability of our charity and would provide a flexible role for someone seeking to work alongside family or study commitments.  … Read More
We use cookies on our website to give you the most relevant experience by remembering your preferences and repeat visits. By clicking “Accept”, you consent to the use of ALL the cookies.
Cookie settingsACCEPT
Privacy & Cookies Policy